To share your memory on the wall of Mother Jackie Wright, sign in using one of the following options:

Provide comfort for the family of Mother Jackie Wright with a meaningful gesture of sympathy.

After moving to her new husband’s hometown, Camden, South Carolina, to care for his ill parents, Jackie became the first lady of Mt. Moriah Baptist Church, the city’s largest African American church, as her husband was named its new pastor. Jackie also worked as a substitute teacher at Jackson Junior High School. Jimmy had his barbers license, working alongside his father in his business, the largest barber shop in the city, and Jackie decided to pursue her cosmetology license in neighboring Columbia, South Carolina.

When Jimmy was accepted to graduate school at UW-Madison, the pair packed up and moved to Wisconsin, in 1958. Once there, they became one of Madison’s first minority business owners, constructing and operating Jackie & Jimmy’s Beauty and Barber Shop. Jimmy sold the business, on a handshake, after accepting a position to head the Equal Opportunities Department with the City of Madison, and Jackie became a caring and devoted stay-at-home mom to her two children, Deana and Coley, who the couple lovingly adopted as babies.

Jackie, affectionately known as “Mother Wright”, provided the love, support and inspiration her husband needed to face what could at times be a frightening, dangerous and demanding job fighting racism, and other inequities the Madison community. Jackie and her husband were a working team, facilitating fairness and equality throughout the Madison community, and beyond.

Mother Wright had one of the kindest spirits, and warmest smiles. She was humble, selfless and abundantly giving. She loved, and was loved by, all who she encountered. Jackie was the epitome of service to others, always willing to lend a helping hand and caring for others and their needs. She also had an amazing sense of humor, was witty and had an infectious laugh.


Jackie and her husband sponsored many African students over the years, helping them with admission to UW-Madison, housing them, providing financial and emotional support and assisting with securing their green cards. They all called her “mom”, and several have continued to stay in touch, even to this day.

Jackie was a founding member of the Madison Urban League, Friends of South Madison, the Madison NAACP, and Minority Women’s Network. She was also a member of the League of Women Voters, Church Women United and sat on numerous boards and committees. She also was the recipient of several awards, including the Reverend James C. Wright Humanitarian Award, in 1996, the Wisconsin Women of Color Network’s Woman of Achievement Award and the Order of the Eastern Star, Friendship Chapter No. 2 Mother Full of Grace Award, in 2008.

Jackie worked tirelessly for, and in, her community, serving on many boards, sitting on several committees and helping out at the polls on election days. She also volunteered at a multitude of organizations throughout her life, including at Wright Middle School, named after her late husband. Like him, she was a strong advocate for education, specifically for students of color.

She loved her TV watching, as she became less mobile over the last few years … The Price is Right, Let’s Make a Deal, cooking shows on The Food Network, CNN and MSNBC (when the news wasn’t Trump-related), reality singing competitions, The Steve Harvey Show (yep, she was bummed when his show was cancelled this year) and old episodes of Law and Order, watching into the wee hours of the morning. Jackie also loved watching basketball games, especially Steph Curry and the Golden State Warriors. Jackie loved wearing anything sparkly … and she loved her hats!

As a born again Christian, Mother Jackie Wright loved Jesus with all her heart. She was often seen handing out The Sinner’s Prayer to strangers at church, or while out and about. She frequently visited hospitals to share the gospel of Jesus Christ with patients, encouraging them to give their life to Christ. She was selfless, an abundant giver, was a true example of a Christian and lived her life biblically based. She believed in the gifts of the spirit, and was an avid prayer warrior. Jackie loved her church, Mt. Zion Baptist Church, and her church family. She is a former first lady of the church. She was a member of the Mother’s Board, the Mission’s Ministry, the Rose of Sharon, the Food Pantry and the Mass Choir. Though her health prevented her from attending services over the last couple of years, she continued to listen to sermons online and follow along with scriptures in her bible. She was often heard in her bedroom, praying aloud or singing a favorite hymn.

Jacqueline was a devoted wife, mother, grandmother and great-grandmother. She was preceded in death by her father, Sedalia Turner, her mother, Gerdine Turner, her uncles, Verlee Keaton, James Keaton and Tennie Keaton, an aunt, Gertrude Jackson, and her husband Rev. James C. Wright.

We encourage you to share your most beloved memories of Mother Jackie here, so that the family and other loved ones can always see it. You can upload cherished photographs, or share your favorite stories, and can even comment on those shared by others.

Taryea sent flowers to the family of Mother Jackie Wright.
Show you care by sending flowers

Posted Dec 06, 2019 at 03:51pm
Mother Wright (Jackie to us), you were a major part of the Quaker Housing Inc Board that oversaw the Fisher Taft Apartments in south Madison. Thank you so much for your efforts there. You made it a much better place. We will miss you. You sure did enjoy fruit cake!! Sorry I just found out about your going 'upstairs'. Stan White
Comment Share
Share via:
DW

Posted Nov 15, 2019 at 09:45pm
Mother Wright, You are definitely a Beautiful person, wife, mother and friend. And now the Lord will truly use you in His service .
I will miss you more than anyone knows
You and my mother *Lorraine* were good friends. I'm so glad to have known you Mother Wright , YOU ARE A JEWEL LUV U♡♡

Posted Nov 15, 2019 at 09:44pm
Mother Wright, You are definitely a Beautiful person, wife, mother and friend. And now the Lord will truly use you in His service .
I will miss you more than anyone knows
You and my mother *Lorraine* were good friends. I'm so glad to have known you Mother Wright , YOU ARE A JEWEL LUV U♡♡

Posted Nov 05, 2019 at 04:00pm
Our prayers are with the family of Mother Wright. We are sorry we were not able to be there for her homegoing. I met her at Mt Zion Baptist Church in 1962. She was always loving and kind and looked out for me. She was my beautician also and was there when Sam and I were married. She was an asset to the community and will be missed. Thank God for her life and legacy; many people are blessed by her good deeds. Sam and I express our sympathy and love to her family and friends. Shirley & Sam Williams
Comment Share
Share via:
T

Posted Nov 01, 2019 at 06:33am
You were everyone's second mother. So grateful for your presence in my life. Loving you dearly. 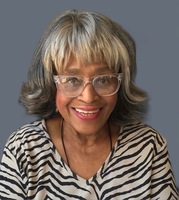